View basket “A SIX WEEKS TOUR, THROUGH THE SOUTHERN COUNTIES OF ENGLAND AND WALES. DESCRIBING, PARTICULARLY, I. The present State of Agriculture and Manufactures. II. The different Methods of cultivating the Soil. III. The Success attending some late Experiments on various Grasses, etc. IV. The various Prices of Labour and Provisions. V. The State of the Working Poor in those Counties, wherein the Riots were most remarkable.WITH DESCRIPTIONS and MODELS of such new invented IMPLEMENTS of HUSBANDRY as deserve to be generally known:INTERSPERSED With Accounts of the Seats of the Nobility and Gentry, and othER OBJECTS WORTHY OF NOTICE. IN SEVERAL LETTERS TO A FRIEND. BY THE AUTHOR OF THE FARMER’S LETTERS..” has been added to your basket.

The Channel Pilot, Part I..

Recollections Of A Military Life..

The Sports Of The World..

Bound in original half blue morocco over…

General View Of The Agriculture Of The County Of Kent;[full title…]

The Principles And Practice Of Agriculture, Systematically Explained; In Two[full title…]

Bound in contemporary half calf, gilt with… 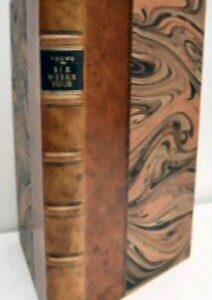 A Six Weeks Tour, Through The Southern Counties Of England[full title…]

The Farmer’s Tour Through The East Of England..