The Shyre Of Kent, Diuided Into The Five Lathes Thereof With The Roads..

This is the earliest surviving printed map of Kent, and if shown to date from 1570, the earliest of any English county. It is also the first to show the ancient five lathes of the county. The attribution is unclear, but it may be the 'Chart of the Shire,' referred to by William Lambarde in the first edition of his Perambulation of Kent.' 1576. However, a map of Kent had already been cited by Lambarde in his manuscript of the Perambulation, 1570 and it is suggested that this may be identical to the 1576 map. Taylor's Tudor Geography considers the map may be the work of the engraver, Nicholas Reynolds. The first map of Kent, which can be dated with certainty is that of Christopher Saxton, but issued as part of a larger map, including Surrey, Sussex and Middlesex. in 1575. This version appears to be the third state, as quoted by Burgess, which includes the main roads and is dated by him to c. 1720-30. 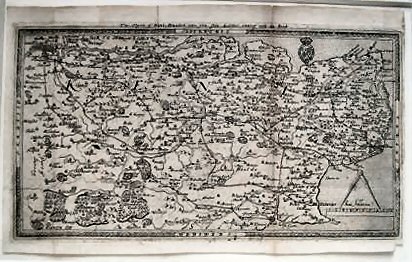