Unsigned and undated but,

Original watercolour, 16 x 11 inches approx., depicting a stagecoach crossing open heath and passing a crossroad with its signpost. The coach is well-loaded with six outside passengers in addition to the driver and guard. In the far distance a hunt is in progress with the hounds hotly pursued by the huntsmen. The signpost cannot be read but atop the post is a rectangle containing the initials CBN. The door of the coach shows the route but only London is distinct enough to be readable; nonetheless, the title 'The Coast Road' appeared on the old backing, and it is highly likely that this is one of a number of coaches that connected London and Dover. Additionally on the side of the coach can be made out Fetter Lane, London, and Hatchet[t's], Piccad[illy]. There was likely a coaching inn in Fetter Lane, and certainly there was one in Piccadilly called Hatchett's.

Charles B. Newhouse, 1805-1877, was widely known for his coaching scenes and numerous prints were published based on his work.. 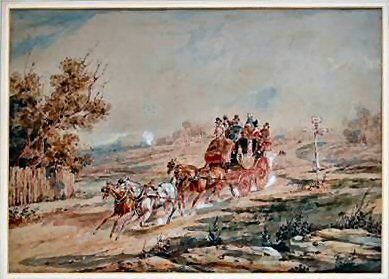