Kent Actually Survey’d And Delineated By John Seller, Hydrographer To The King..

A great example in original full body colour to the lathes and fine outline colour. Traces of old folds otherwise a fine example with good margins.

Newly corrected and amended with many additions.

Copper engraved map. 37.75 x 24.25 inches within the inner frame. Two sheets joined. Dedication cartouche To the Nobility and Gentry...of Kent at upper right with martial and naval achievements. At lower left, Title and imprint cartouche with cornucopia depicting the produce of the Garden of England with additional cameo of the white horse of Kent below and two scale bars to its right. At lower right, The Explanation of the Map cartouche with maritime imagery. To its left explanation of symbols used in map inscribed on column base and compass rose to right of dedication. Sea creatures and ships surround the coasts, with a naval engagement off Romney Marsh.

Probably the rarest single map of Kent engraved for Seller's projected Atlas Anglicanus. John Seller, hydrographer to Charles II, announced in 1679 his intention to produce a folio county atlas together with the surveyor John Oliver and the engraver Richard Palmer. By 1680 three counties were completed and it was announced that they were now 'upon on the actual Survey of the County of Kent.' Only two further counties were completed before the project was abandoned and the partnership dissolved in 1693. The printing history of the Kent map, engraved on a scale of a half-inch to one mile, is obscure. After the first impression of about 1681 (of which no examples are known), it was reissued in 1688 under the name of Seller alone and the plate was then sold to Philip Lea who issued it with some examples of his reprint of Saxton's atlas in 1693/4. Very few of these are known and, following the deaths of Seller (1698) and Lea (1700), the map was revised and sold by R. Davies in 1710. It then passed into the hands of Herman Moll and P. Overton who published it c.1711-14. This copy of the map, the fifth issue, had the additional name, I. King, added to the imprint. A final and sixth issue appeared much later, in 1775. As well as being the most difficult of the Kent maps to find, its attractiveness as an example of late seventeenth century engraving is clear. The title, dedication and explanation are all set within decorative cartouches, which are lavishly embellished. The survival rate of maps like this is very low due to their large size, and in this case as it was not issued in an atlas and bound in book form. The few copies that do survive were probably bound up in composite atlases by early collectors. 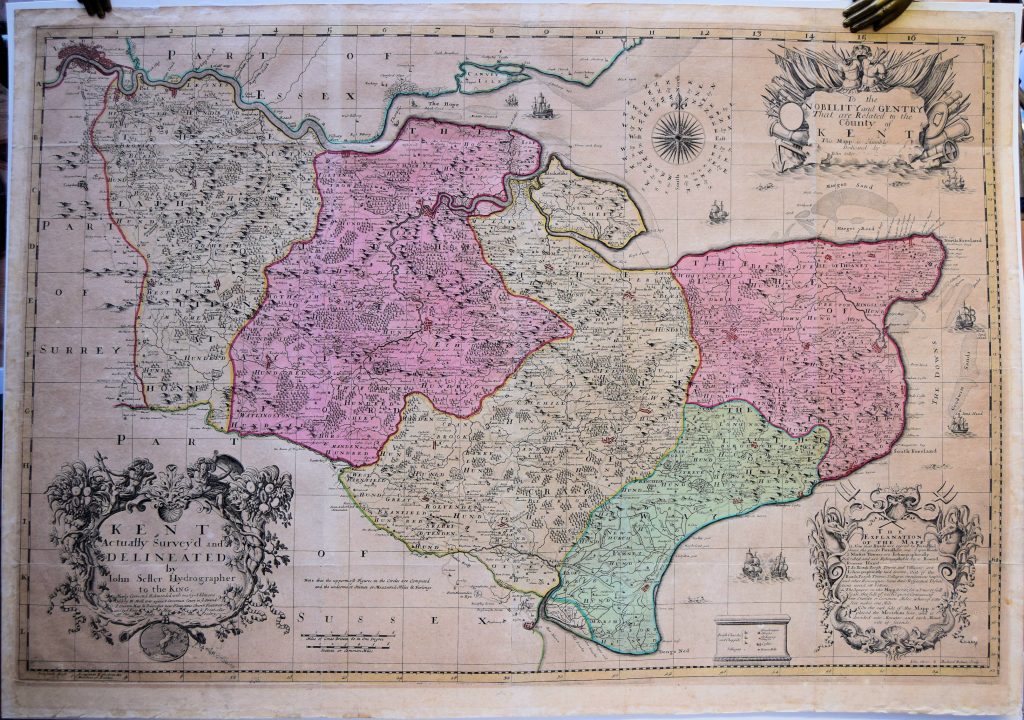