Issued by the Sheriff of Kent at Maidstone,

Hand-written single sheet, consisting of approximately 252 words in which robert burrow, sheriff of kent orders that the sentence past by william earl of mansfield chef justice, that the said mackonnogal be hanged by the neck until dead...and that this shall be your sufficient warrant and authority for so doing. the eighteenth day of august 1780.

Single manuscript sheet 10.25 x 8.25 inches, sealed with a black seal of the Sheriff of Kent.

A macabre document, which it is chilling to think this sheet of paper had the authority to take a mans life. The Morning Chronicle and London Advertiser reports the passing of the death sentence in the 15 August 1780 issue. The newspaper of the 7 August, reports on the Maidstone Summer Assizes, and gives some details regarding the offence: 'John Mackonnegal, charged with stopping on the King's highway, John Rust, in Chatham, and robbing him of a silver watch and two shillings. Guilty.' However the register of deaths by hanging has no record of the sentence having been carried out. There are known to be some gaps in the official records, or perhaps somehow the sentence was commuted to the lesser sentence of transportation?

Transcription: Kent (to wit) Robert Burrows Esquire Sheriff of this county beforesaid to Thomas Watson my Gaoler greeting whereas at the - last assizes and general Gaol *** of our Lord the King hold on at Maidstone in and for the County aforesaid on Monday the seventh day of this instant month of August before William Earl of Mansfield his Majesty Chief Justice – assigned to hold place before the King himself Sir *** Eyre Knight one of the Barons of his Majesty's Court of Exchequer Justice of your said Lord the King appointed to which the Gaol of the said County of the Prisoner - therein being John Mackonnogal was attained of a - Robbery on the Highway for which he is condemned to be hanged. There are therefore in his Majesty's name strictly to charge of command you that all Excuses and *** - whatsoever being set apart, you fail not, but upon - Thursday next being the Twenty Fourth day of this instant August between the hours of Ten in the forenoon and - two in the afternoon of this same day you cause to be hanged by the neck until he be dead him the said - John Mackonnogal at this usual place appointed and heretofore used for that purpose and this shall be your sufficient warrant of authority for so doing given under the Gaol of my Office the Eighteenth day of August in the twentieth year of his Majesty's Reign and in this year of our Lord 1780 by the same Sheriff. 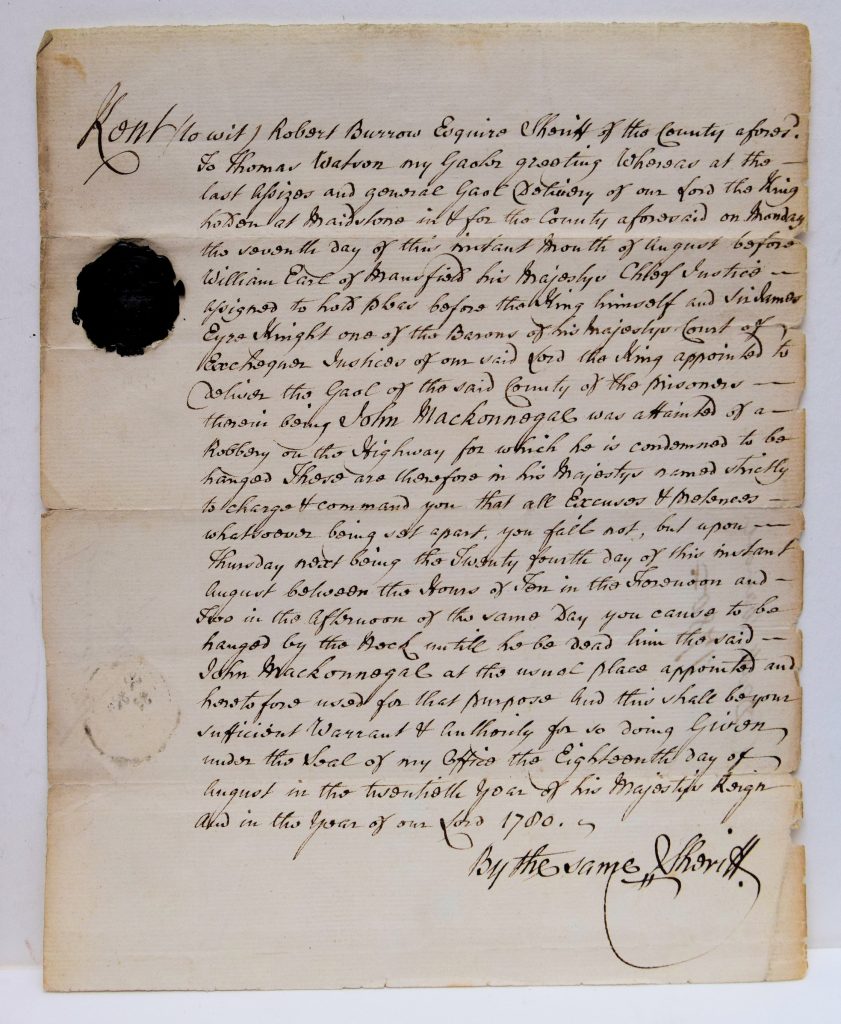