Files of the swingfield platoon of the local defence volunteers renamed kent home guard, from summer of 1940, through to 1945. includes correspondence, numerous circulars from local headquarters, personnel and equipment lists, training schedules and a hand drawn map of the area. a wide range of printed material, both commercial and government publications form part of the collection including army training manuals and circulars, armoured fighting vehicle recognition handbooks, emergency invasion recommendations, report of a secret exercise held in 1943 and two early home guard publications of 1940-41, including one on the formation of kent home guard.

Archives, 8 x 13 inches and smaller, c.700 items. Books, pamphlets, leaflets, etc., 25 main items. A detailed list of full contents available upon request. Very good readable condition with expected signs of aging and use. Books and pamphlets show some signs of wear and wartime use, but otherwise also a very good collection, the whole in a leather covered cardboard suitcase of the period. The Swingfield Platoon was located in the area of the country closest to German occupied France. In 1940 conflicts of the Battle of Britain raged in the skies overhead and the RAF fighter station of Hawkinge located nearby was bombed several times. The invasion scare was at its height and continued into 1942 (Operation Sealion would have involved beach landings at Hythe and paratroops dropping on to the heights north west of Folkestone). From 1940 until late September 1944 the area of the Cinque Ports Battalion was shelled from across the Channel and the Home Guard were instructed to collect shell fragments; 'pilotless aircraft' (V1s) were also a cause of concern. The record files of the Swingfield Platoon of Kent Home Guard, maintained by its commander, Lieutenant A. D. McFarlane (promoted Captain, 1/9/44), of The Gardens, Swingfield. From 1940-42, the No. 4 Swingfield Platoon was part of the 7th Lyminge Battalion, commanded by Lt. Colonel Mildred of Bower Wood, Stelling Minnis. In 1942 a reorganisation took place and Swingfield became No. 3 Platoon of Folkestone Rural Company of the 8th Cinque Ports Battalion of Kent Home Guard which had its HQ at The White House, Alkham and was commanded by Major Brent, the Adjutant being based at 19 Manor Road, Folkestone. In October 1944, Major Brent was promoted to Lt. Colonel in command of the 8th Cinque Ports Battalion, relieving Lt. Colonel Gribbon and his deputy, Captain Byford was promoted to Major and command of the Folkestone Rural Company. A number of excuse letters for failing to attend Home Guard parade have been collected together; reasons given include family sickness, the agricultural necessities of stock handling and ploughing, and scarcity of labour for employers. In the second part of 1944, there is an emphasis on the winding up of the Kent Home Guard, with stand down and church parades, including at Canterbury Cathedral, promotions, awards and commendations, but especially with commanders trying to obtain the return of all equipment in the hands of the rank and file members. This included such items as model aircraft, shovels, coal and buckets as well as explosives and weapons. A rare documented survival of Home Guard activities at the local level, and in a frontline area. 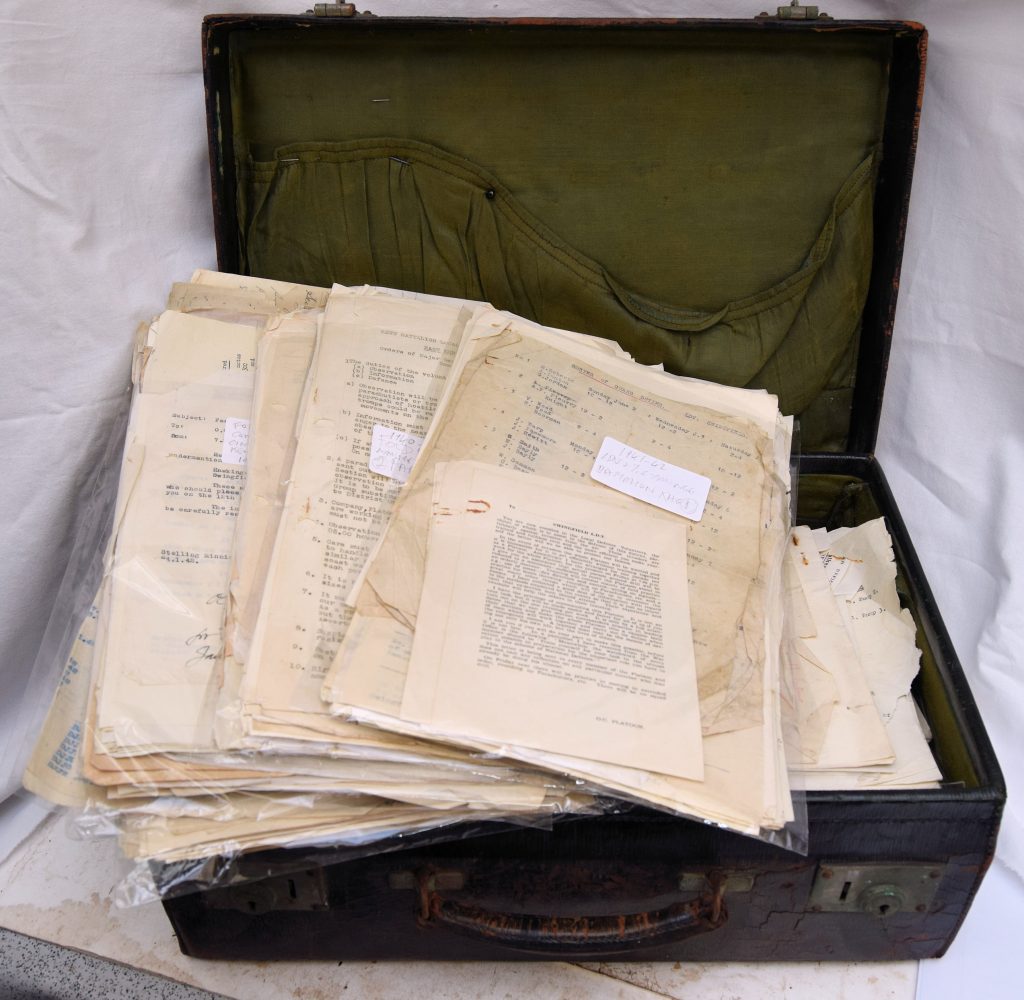